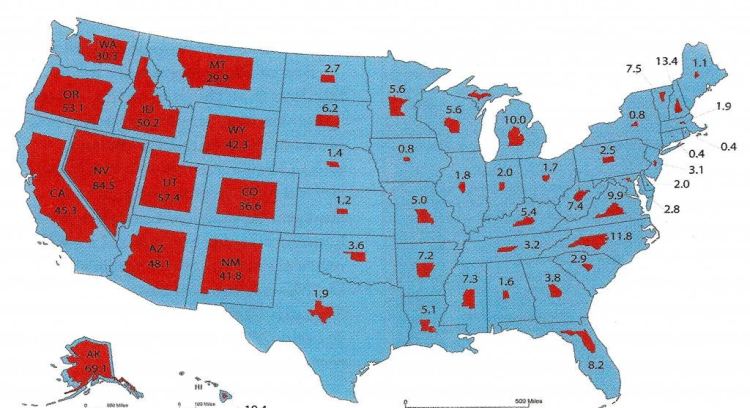 It’s past time for states to take control of the land within their borders.

Via the Salt Lake Tribune:

More than 50 political leaders from nine states convened for the first time to talk about their joint goal: wresting control of oil-, timber -and mineral-rich lands away from the feds.

Utah House Speaker Becky Lockhart, R-Provo, was flanked by a dozen participants, including her counterparts from Idaho and Montana, during a press conference after the daylong closed-door summit. U.S. Sen. Mike Lee addressed the group over lunch, Ivory said. New Mexico, Arizona, Nevada, Wyoming, Oregon and Washington also were represented.

The summit was in the works before this month’s tense standoff between Nevada rancher Cliven Bundy and the Bureau of Land Management over cattle grazing, Lockhart said.

“What’s happened in Nevada is really just a symptom of a much larger problem,” Lockhart said.

Fielder, who described herself as “just a person who lives in the woods,” said federal land management is hamstrung by bad policies, politicized science and severe federal budget cuts.

“Those of us who live in the rural areas know how to take care of lands,” Fielder said, who lives in the northwestern Montana town of Thompson Falls.

“We have to start managing these lands. It’s the right thing to do for our people, for our environment, for our economy and for our freedoms,” Fielder said.

Idaho, New Mexico, Arizona, Nevada, Wyoming, Oregon and Washington also were represented, but none of the other states has gone as far as Utah, where lawmakers passed a measure demanding that the federal government extinguish title to federal lands.

The lawmakers and Gov. Gary Herber have said they’re only asking the federal government to make good on promises made in the 1894 Enabling Act for Utah to become a state. The intent was never to take over national parks and wilderness created by an act of Congress, said Lockhart, a Republican from Provo.

“We are not interested in having control of every acre,” she said. “There are lands that are off the table that rightly have been designated by the federal government.”

Ivory said federal government’s debt threatens its management of vast tracts of the West and its ability to make payments in lieu of taxes to the states, the Tribune reported. He said the issue is of interest to both urban and rural lawmakers.

“If we don’t stand up and act, seeing that trajectory of what’s coming … those problems are going to get bigger,” Ivory was quoted as saying.

Do you agree states should do whatever it takes to get their land back from the federal government? How do you think Washington will react to this?