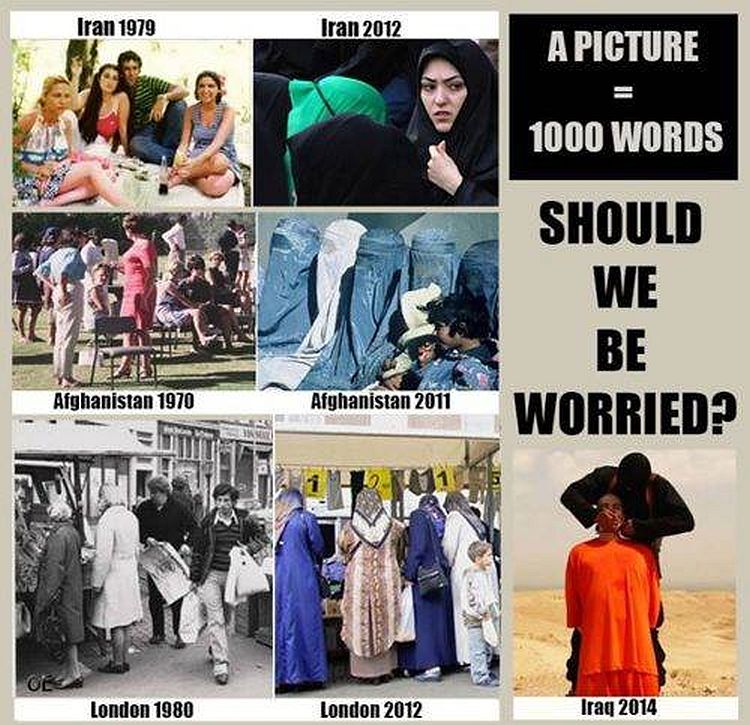 So we need more Muslim migrants here in the US? We really need people that want Sharia law here in our country? That’s not something that we’re just going to take lying down.

Russ Hepler writes that the left magically believes that Islamic refugees can completely integrate into America society.  After all, are we all immigrant “refugees” in America, they argue.

But, is this really the truth? Can devout Muslims really integrate into American society and fully embrace our laws and Constitution?

Allen Westreports a list of 10 ways the strict teachings of Islam don’t work with our Constitution:

1. The First Amendment guarantees the freedom of speech, while Quran 29:68 and the Hadith 3:106 prohibit insulting Allah and Mohammad

2. The Eighth Amendment prohibits cruel and unusual punishment, while the Quran prescribes punishments such as cutting the hands off of thieves (Quran 5:38), lashes for fornication (Quran 26:23) and adultery (Quran 24:2)

3. The Constitution establishes itself as the supreme law of the land in Article Six, while the Quran establishes Allah’s word as government (Quran 18:26)

4. The First Amendment prevents the government from prohibiting the free exercise of religion, while Quran 4:89 states that “Those who reject Islam must be killed.”

5. The Fifth Amendment guarantees due process. The Quran only counts the testimony of a female witness as half of that as a man (Quran 2:282).

6. The Preamble states “We the people of the United States, in order to form a more perfect union, establish justice, insure domestic tranquility, provide for the common defense, promote the general welfare, and secure the blessings of liberty.” By contrast, Quran 8:12 states “I will cast terror into the hearts of those who disbelieve. Therefore strike off their heads and strike off every fingertip of them.”

7. The Thirteenth Amendment prohibits slavery while Quran 33:50 allows women captured during battle to be kept as sex slaves.

8. The Fourteenth Amendment guarantees equal protection under the law, while the Quran doesn’t consider women, Jews, Christians, and other non-Muslims as equal under the law (Quran 5:60, 7:166, and 2:65)

9. The Fourth Amendment protects against unreasonable searches and seizures, but the Quran allows the seizure of land, homes, and wealth of non-Muslims (Quran 33:27, 8:69, and 48:20).

10. The Second Amendment protects the right to keep and bear arms while the Quran prohibits non-Muslims from owning weapons (Quran 9:29).

This list may not be “politically correct”, but it is essentially accurate.

The real truth is that for Muslims to fully integrate into American culture, they have two options:

First, they must accept a “watered-down”, more liberal understanding of Islam if they want to conform to U.S. law.

I’m sorry, the American people will just not accept “honor killings” by offended Muslim fathers as their right.

Or second, if they want to retain the bulk of their faith, they must reject a good portion of American law and hide this lawless attitude.

Many people believe this is the position President Obama has taken over the years.  Since Islamic law allows for deception in the furtherance of the faith, it is possible for Muslims to be dishonest about what they believe and still be considered “orthodox” in their faith.

In the words of the former Supreme Court justice Robert Jackson: “In any broad sense, Islamic law offers the American lawyer a study in dramatic contrasts. Even casual acquaintance and superficial knowledge – all that most of us at bench or bar will be able to acquire – reveal that its striking features relative to our law are not likenesses but inconsistencies, not similarities but contrarieties. In its source, its scope and its sanctions, the law of the Middle East is the antithesis of Western law.”

In addition to this, it is also clearly demonstrable that Islamic countries do not accept other religions with any sort of respect or tolerance.

We reported here recently that 9 out of the top 10 countries for Christian persecution in the world today are Islamic.

This conflict of values and beliefs has no real middle ground. Either Muslims will accept the American Constitution and subordinate their faith to it to be law-abiding American citizens, or they will continue working to overthrow America’s Constitution in favor of Sharia law.