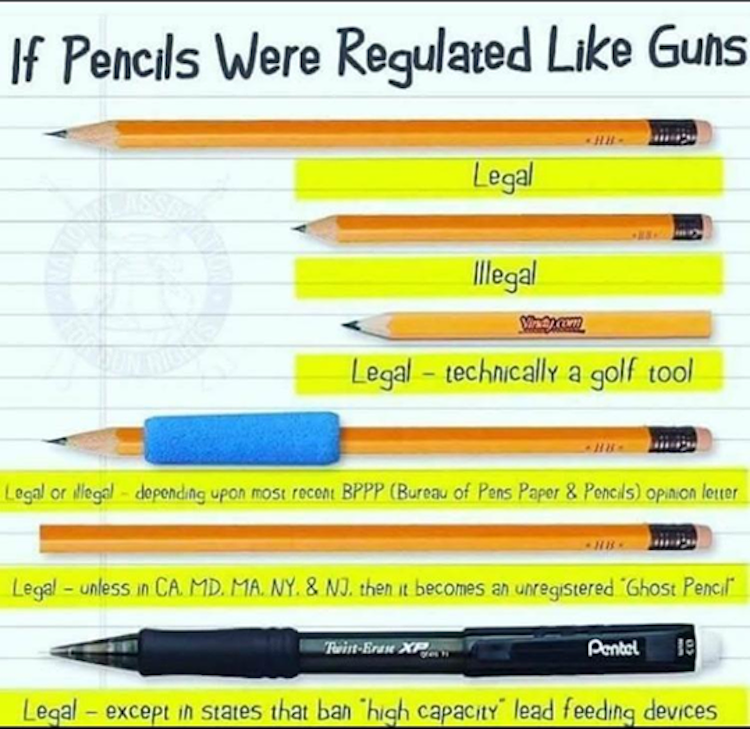 From Seth Connell: Ahh yes, the word “militia.” A word that brings feelings of patriotism to some, and fear to others; here we are once again debating the use of the militia in modern society.

And not only that, but we are also considering the use of standard semiautomatic sport rifles that are owned by tens of millions of American citizens.

Deemed the “modern musket” by some, AR-style rifles are owned by tens of millions of Americans. The true number of rifles owned is truly impossible to know, but I wouldn’t be surprised if the number of AR-style rifles alone surpasses 100 million here in the U.S. Needless to say, this is THE American rifle.

However, we are in a time where ignorance prevails over knowledge, and fear-mongering overrides cool-headed and rational judgment. States and courts have condoned banning these rifles simply based off of magazine capacity and certain cosmetic features, often designating these rifles as “military style” (though true military style rifles are select-fire, not solely semi-auto). Our rights are under attack, and I do not see these attacks abating any time soon.

Especially given several recent atrocious circuit court decisions, the time is ripe for new legal protections to be granted to the nearly 100 million gun owners of the United States. So what do we do?

We bring back the militia.

Under a proposed executive order, the militia would be brought back to the forefront of domestic policy, and it would be used in a way to subvert unconstitutional, egregious, and arbitrary bans on the possession of standard AR-style rifles.

Especially given several recent atrocious circuit court decisions, the time is ripe for new legal protections to be granted to the nearly 100 million gun owners of the United States. One such

According to The Truth About Guns, the order, proposed by Virginia attorney Lenden Eakin, would define certain style rifles for designated militia purposes. Through the order, local and state bans on certain firearms would be rendered null because of the legal protection through militia usage definition.

The simple mechanism of attorney Eakin’s proposal: by defining certain categories of rifles for militia use, the President could strike state and local bans on many of the most popular “assault rifles” and their magazines.

Mr. Eakin also notes: “An Executive Order like this could have a significant impact on the litigation to challenge Assault Weapons Bans currently making its way through the Courts. It would help the challengers.”

Eakin sent the text of this proposed order to John Boch of TTAG. I have to say, this is a pretty thorough and well-thought out proposal for protecting our right to bear arms:

Section 1.  Purpose. Both individual and community safety are critically important to the national security of the United States. Terrorism, transnational criminal activity and potential acts of war by foreign nations present a significant threat to national security and our citizens, who have the right and the duty to defend themselves, their communities, their States and the Nation.

(a)  Support and defend the Constitution, including the Second Amendment right of citizens to keep and bear arms for Militia purposes,as well asself-defense.

(b)  Encourage citizens to be prepared to act as members of the Militia to defend communities, States and the Nation, as part of the common defense contemplated by the Constitution of the United States.

(c)  Discourage restrictions by States and political subdivisionson individual possession of firearms suitable for Militia purposes by citizens of the United States.

(b)  “Self-Defense” shall mean the actions of citizens to defend themselves and their families from physical attack.

(c)  “Communities” shall mean neighborhoods, towns, cities, counties and other political subdivisions of citizens who live in distinct geographic areas within a State.

(d)  “State” shall mean one of the fifty States of the United States.

(f)  “Militia Rifles” shall mean the firearms designated in Section 4 that are made in America and suitable for use in self-defense, community defense, defense of States and defense of the Nation.

Section 4.  Designation of Militia Rifles.  That the following firearms and accessories are authorized and appropriate for individual citizens to keep and bear for Militia purposes under the Constitution and the laws of the United States:

(a)  The AR-15 and similar semi-automatic rifles, to include flash suppressors and bayonet lugs, magazines of up to thirty round capacities, M-7  bayonets, and ammunition in 5.56 NATO or .223 Remington, in all quantities.

(b)  The M1A and similar semi-automatic rifles, to include flash suppressors and bayonet lugs,magazines of up to twenty round capacities, M-6 bayonets, and ammunition in 7.62 NATO or .308 Winchester, in all quantities.

(c)  The M1 Garand and similar semi-automatic rifles, to include flash suppressors and bayonet lugs, M-5 bayonets, and ammunition in.30-’06 Springfield, in all quantities.

(d)  Bolt action rifles in the calibers of .30-’06 Springfield; 7.62 NATO or .308 Winchester; 5.56 NATO or .223 Remington; or any substantially equivalent caliber, and ammunition appropriate for the rifles, in any quantity.

(This list could be expanded or replaced by a broad definition)

Section 5.  Pre-emption.  This Executive Order is intended to pre-empt the laws of States or political subdivisions that infringe upon the rights of citizens to keep and bear the arms designated in Section 4.

Section 6.  Judicial Notice.  That the judges of all State and Federal Courts are hereby given notice that possession of the designated Militia Rifles and accessories by citizens should not be restricted or infringed upon by State laws or the laws of a political subdivision of a State and any such law should be reviewed under the strict scrutiny standard to determine whether it is a violation of the Constitution of the United States after judicial consideration of this Order and the fact that it was issued by the Commander in Chief of the Militia.

It is important to note that this is not meant to be a permanent measure. It is meant to be an interim proposal until Congress passes new legislation to protect ownership of such firearms, and the courts are filled with new justices who hold to proper Constitutional views of the right to bear arms.

Bach stated that, “I neglected to note in the original story how this is meant to serve as a stop-gap measure. Ideally, only until a more permanent remedy could be achieved. Or alternatively, until the Supreme Court, with one or more President Trump appointees, could reverse that Fourth Circuit ruling and strike scary gun bans on the whole.”

Now, at first glance, this seems to be a pretty good idea, one that would swiftly reverse years of egregious restrictions on the right to bear arms. However, we must consider something that was often a major point of criticism against the Obama administration: executive fiat.

It seems to me that this borders on executive fiat. Some may argue that the example of President Washington calling up the militia to put down the Whiskey rebellion is a precedent for such an order, but that issue was much more nuanced than an executive order.

Washington did call up the militia to suppress the rebellion, however, it was done with the authority of the Militia Act of 1792, and with the required signature of a justice of the Supreme Court. Not to mention that the entire measure was done in response to an actual rebellion, not simply a perceived threat (though there are terrorist concerns for sure).

I think that the idea of reviving the militia in our legal system is a good one, but I think it would be better done through legislation and not by executive order. Eakin did remind us that the order is designed to be an interim measure, but given the abuse that executive orders have had in the past few decades, it’s time to defer to Congress on this one (and I discussed that idea several months ago).