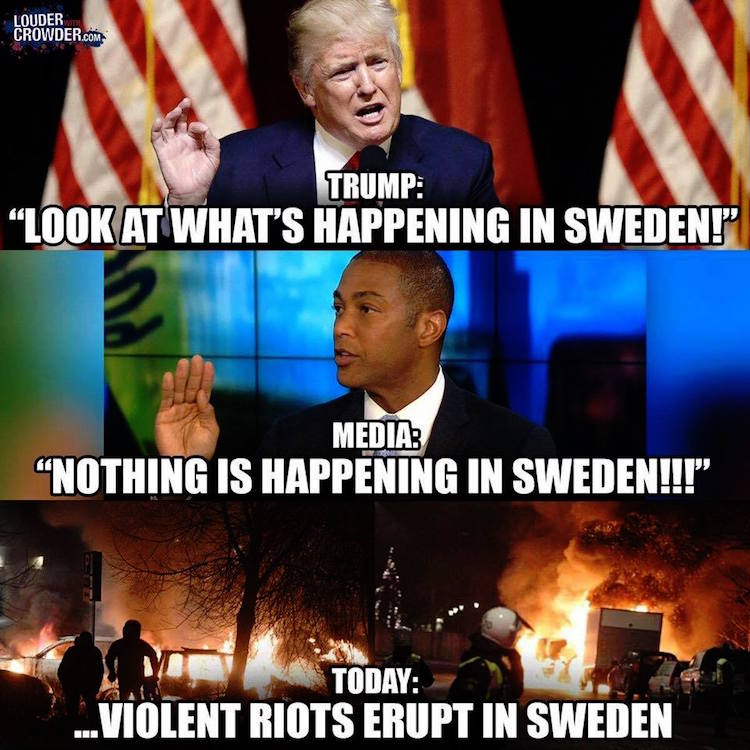 Denial should be added to the list of things Sweden is known for.

After a speech he gave in Florida, President Donald Trump became the butt of Twitter jokes. He referenced problems Sweden was having with migrant attacks and critics immediately dubbed his story as “fake news.”

They even created the hashtag: #lastnightinSweden.

Even Chelsea Clinton joined in on the fun and teased President Trump by tweeting, “What happened in Sweden Friday night? Did they catch the Bowling Green Massacre perpetrators?”

Careful, Chelsea. You and your mother live in a glass house…

However, as it turns out, President Donald Trump knew what he was talking about.

Friday night, Fox News host Tucker Carlson interviewed documentarian Ami Horowitz about his upcoming film about violence involving migrants in Sweden. Horowitz claims that the Swedish government is downplaying an uptick in violence that followed a wave of refugee migration into the country.

During the segment, Carlson showed contemporary clips from the documentary…

…As for Sweden, Ami Horowitz’s film shows a country that is deep in denial about a growing problem of migrant violence – including a sharp uptick in rape over the last five years. Horowitz claims that the increase correlates directly to Sweden’s refugee acceptance program; the country has taken in more than 190,000 Muslim immigrants in the same time frame.

Sweden, Horowitz says, is hiding the truth about its situation, and the Swedish people want their country to adapt to the migrants, rather than requiring the migrants to adapt to Sweden.

Besides the fact that the liberal media establishment immediately assumes President Trump is lying and sways the rest of the United States to believe the same, what is Sweden doing?

The last thing the United States needs is an influx of migrant refugees who care not to assimilate, but take advantage of the rights and privileges of our country.

Tolerance and political correctness should not come before national security.

And, if Chelsea Clinton was actually concerned about either of those things, she’d keep a closer eye on her parents than tweet about President Trump.