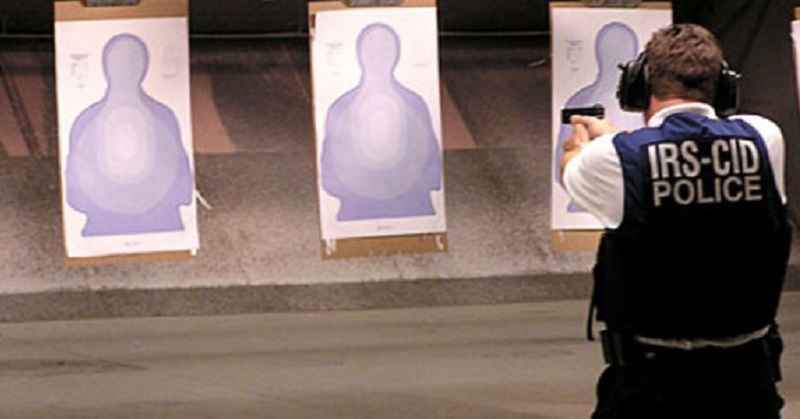 What kind of army is the IRS building?

In the last decade, the Internal Revenue Service has spent nearly $11 million on guns, ammo and other “military-style equipment.” This mass acquisition of weapons of war is new for the agency, but follows a trend of militarization in all executive branches.

In a report by Open The Books, they detail the kinds of weapons and military equipment the IRS and other non-law enforcement agencies have purchased since 2006. The analysis concludes a rapid buildup in weapons, The Daily Caller is reporting.

Weapons spending by the IRS more than doubled between 2006 and 2014. Interestingly, the number of IRS law enforcement agents has dropped from more than 3,000 to 2,000 in that time.

“The recent spikes in IRS purchasing could be related to the increase in recent ‘Identify Theft’ crimes and the prosecution of those crimes into sophisticated gang activity,” the report says. IRS special agents are armed with Smith and Wesson M&P15s, as well as Remington shotguns and Glock .40 caliber handguns.

Despite the decline in militarized IRS employees, the total number of executive branch armed federal agents has risen sharply. There are now more than 200,000 non-Defense Department federal officers authorized to carry firearms and make arrests – more than the number of Marines.

In a Wall Street Journal column, Sen. Tom Coburn and “Open the Books” founder Adam Andrzejewski, wonder what, exactly the Obama Administration is doing with all those heavily-armed officers?

The number of non-Defense Department federal officers authorized to make arrests and carry firearms (200,000) now exceeds the number of U.S. Marines (182,000). In its escalating arms and ammo stockpiling, this federal arms race is unlike anything in history. Over the last 20 years, the number of these federal officers with arrest-and-firearm authority has nearly tripled to over 200,000 today, from 74,500 in 1996.

What exactly is the Obama administration up to?

The Obama Administration has insisted these numbers are only high recently because they are making “bulk” purchases that last for years. If that’s the case, we wouldn’t see a slow uptick in purchases.

Is Barack Obama building a private army for the Executive Branch’s exclusive use?