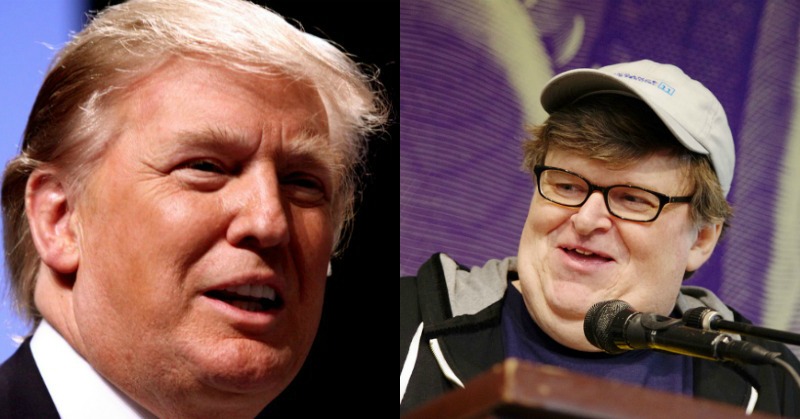 Liberal filmmaker Michael Moore just said something about Donald Trump voters, and it showed that at least some liberals have the capacity to be fair-minded about the other side — at least in this instance.

Michigan native Moore, who predicted that Trump would win in the rust belt and as such, the overall election, told MSNBC:

You have to accept that millions of people who voted for Barack Obama – some of them once, some of them twice – changed their minds this time. They’re not racists. They twice voted for a man whose middle name is Hussein. That’s the America we live in.

But if you put people through another eight years [where] there’s no middle-class jobs, they’re struggling to get by, the basic things like the price of a box of cereal doubles … these are the things that are important to people because they’re living from paycheck to paycheck.

Moore told Megyn Kelly in May that Democrats needed to take Trump seriously, specifically pointing to the mindsets of working-class voters in Rust Belt states where Trump ended up winning.

The Flint, Michigan, native told Bill Maher in July that Trump would win the election by flipping Ohio, Pennsylvania, Wisconsin and Michigan.

Julie Roginsky agreed with Moore’s take on America’s Newsroom, expressing the view that there are two Americas right now and they’re split economically, not based on race or gender.

“This economy over the last eight years, with this income gap, has made people that are affluent much more affluent, but it’s made the rest of America much more concerned about making fundamental ends meet,” she explained.

Roginsky said pundits in the New York City and Washington, D.C. “bubble” missed this factor and how it would affect the election result.

Moore and Roginsky are right. Trump’s win was not about racism — aside from the rejection of the racism and divisiveness fomented by the left — it was largely about factors, such as the economy, that affect all Americans.

That said, while Moore understands that part about Trump’s supporters, it’s a shame that he doesn’t understand Trump and his policies. Instead, he has called for people to protest Trump (so much for a “peaceful transition of power”) in the streets:

I'll be on Chris Hayes live at 8pm ET on MSNBC. Sending a call out over the airwaves 4 all 2 (peacefully) take 2 the streets wherever u live

Hundreds of thousands will take 2 the streets tonight & this weekend. I will be there. YOU be there too! Hundreds of cities! TO THE STREETS!

In fact, if the more fair-minded on the left would just take a breather, they might realize that if Trump can implement many of his policies, we would all be lifted up. That is something that should transcend ideology.

People in this country are struggling and it hasn’t gotten any better for them despite the “hope and change” promised by the Obama administration.

President Obama did work to “fundamentally transform” this country and the people repudiated his radical agenda that did next to nothing to improve their lives.

The left wants to divide and conquer this country with identity politics, so it is very refreshing to hear liberals that see through at least some of the tactics of the left. If we could get away from the identity politics pushed by the left, that would go a long way toward unifying this country.