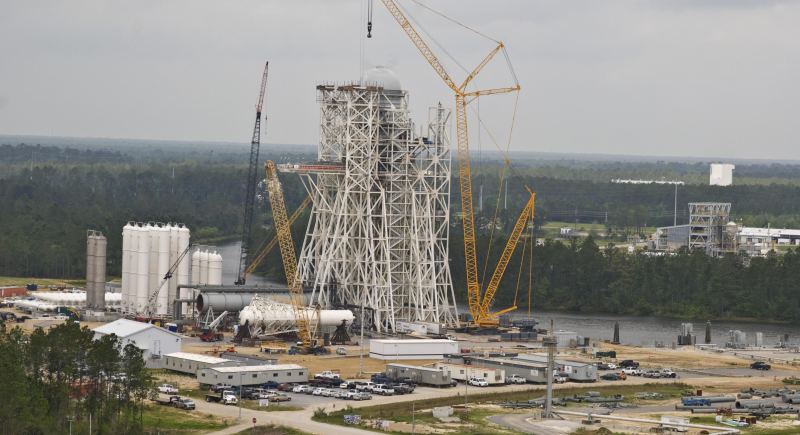 The federal government, via NASA, has wasted $349,000,000 to build a launch tower for a rocket that doesn’t exist and will continue to pay $700,000 a year to keep the tower mothballed.

In August 2007, with George W. Bush in the White House, NASA broke ground in Mississippi on the construction of the A-3 test stand, an elaborate tower that would allow engineers to test the J-2X rocket engine by simulating the vacuum of space.

That rocket was supposed to revive human space flight under the designation Constellation. The tower was intended to cost about $119 million and be finished by the end of 2010.

In spring 2010, President Barack Obama canceled the J-2X rocket program that the A-3 tower was designed to test. Constellation was limping along underfunded. As Obama saw it, it would take until at least 2030 before the program could show results.

Since Congress was slow to endorse the president’s Constellation decision and NASA’s mission had been again and again rewritten, the tower project — nowhere near completion — proceeded.

In the summer of 2010, at the urging of Sen. Roger Wicker, R-Mississippi, the Senate Commerce, Science and Transportation Committee voted to keep some Constellation programs alive and to continue funding the tower project setting Sept. 30, 2013, the target date for completion.

Since it serves no purpose, the agency did not install any testing instruments and will pay about $700,000 a year to keep it mothballed.

A disappointed David Forshee, general foreman on the project for 18 months, had believed he was building a tower that would contribute to space exploration. “What the hell are they doing? I mean, that’s a lot of people’s hard-earned money.”

The empty tower in Mississippi is evidence of a breakdown at NASA, which used to be a glorious symbol of what an American bureaucracy could achieve. In the Space Race days of the 1960s, the agency was given a clear, galvanizing mission: reach the moon within the decade. In less than seven, NASA got it done.

Now, NASA has become a symbol of something else: what happens to a big bureaucracy after its sense of mission starts to fade.

In the past few years, presidents have repeatedly scrubbed and rewritten NASA’s goals. The moon was in. The moon was out. Mars was in. Now, Mars looks like a stretch. Today, the first goal is to visit an asteroid.

Jerked from one mission to another, NASA lost its sense that any mission was truly urgent. It began to absorb the vices of less-glamorous bureaucracies: Officials tended to let projects run over time and budget. Its congressional overseers tended to view NASA first as a means to deliver pork back home, and second as a means to deliver Americans into space.

In Mississippi, NASA built a monument to its own institutional drift.