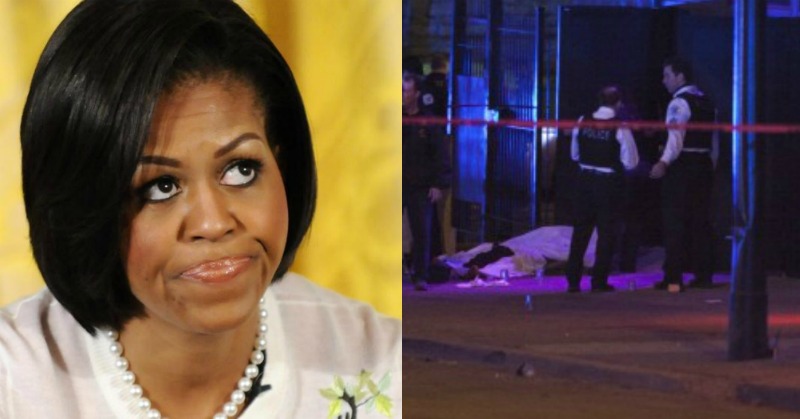 Michelle Obama recently told Oprah Winfrey that with President-elect Donald Trump’s victory, she doesn’t have any hope for the future. The outgoing first lady’s version of “hope” is a bit different than millions of Americans, however, given that she apparently sees a great deal of hope in her husband’s administration that in 2016 saw the rise of homicide rates in most big cities.

Sixteen of the 20 largest police departments reported a year-over-year rise in homicides as of mid-December, a Wall Street Journal survey found. Some notched minor increases, while Chicago has experienced one of the most dramatic jumps, with more than 720 murders—up 56% from 2015.

Chicago’s homicide count, greater than the considerably larger cities of Los Angeles and New York combined, marks a grim tally not seen since the violent drug wars of the 1990s. As the bodies in Chicago pile up—including that of Nykea Aldridge, cousin of basketball star Dwyane Wade, shot while walking with her baby in broad daylight—police are struggling to solve the killings, clearing only one in five homicides so far this year.

Nationally, 37 of the 65 largest police agencies, including ones in San Antonio, Las Vegas and Memphis, Tenn., reported year-over-year homicide increases as of Sept. 30, the Major Cities Chiefs Association said. In 2015, 44 departments reported increases, many for the first time in years.

Darrel Stephens, executive director of the Major Cities Chiefs Association, discussed the worrying stats: “I have a lot of concern about that many cities experiencing those increases in violence.”

Although the numbers are troubling, Stephens noted that it’s still too early to say whether or not they represent a trend.

The WSJ noted this important bit of information about the “hope and change” under the Obama administration:

Some experts attribute the rise to the widely debated view that violent-crime increases are tied to the civil unrest that roiled numerous cities after police killings of young black men, starting with such an incident in Ferguson, Mo., in 2014. The main version of the theory holds that many officers have shied away from confrontation, emboldening criminals. Another posits that growing distrust of police among minority residents has made people less willing to come forward as witnesses and more inclined to resolve disputes themselves.

Why, that could be laid right at Obama’s feet, as he undoubtedly inflamed tensions following officer involved shootings throughout his presidency.

Instead of working to bring the country together and do his job as president, Obama decided to revert to his background as a community organizer in an effort to push the farcical rhetoric that this country is systemically racist.

None of this looks particularly “hopeful,” and it’s truly disturbing that Mrs. Obama sees it as such.

Fortunately, millions of Americans see through the radical agenda and decided to make a change in 2016. Hopefully Donald Trump holds true to his promise that he will restore “law and order” in this country, something that took a devastating blow over the last eight years with disastrous results.