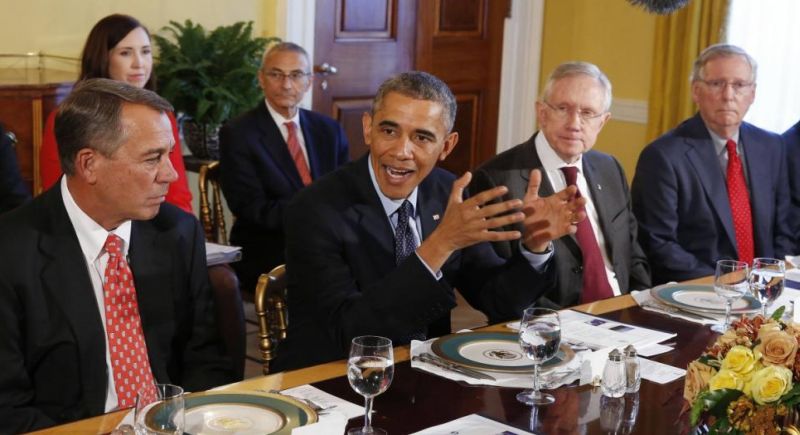 This president does not give a damn about what the American people want. He plans to go ahead with executive amnesty even though 75% of the people oppose it.

President Obama firmly rejected advice from top congressional Republicans on Friday that he delay his promised executive action on immigration reform, dismissing calls from critics inside and outside his party to allow Congress to debate the issue next year.

Over a two-hour lunch of Bibb lettuce salad, herb-crusted sea bass and pumpkin tart, House Speaker John A. Boehner (R-Ohio), Senate Minority Leader Mitch McConnell (R-Ky.) and their lieutenants warned Obama that his acting alone on immigration would spoil chances for bipartisan agreement on other issues when the new GOP-controlled Congress convenes.

Seated with 12 top members of the House and Senate in the Old Family Dining Room, Obama shot back that he intended to proceed, saying that he had already waited almost two years for congressional action on immigration. He added that his decision should not upend opportunities for cooperation on unrelated matters, according to aides familiar with the exchange.

The new focus on Obama’s plans to revamp the nation’s immigration system by executive fiat came as the president is reportedly reviewing proposals to allow as many as 5 million illegal immigrants to stay in the United States at least temporarily, according to several people familiar with his plans.

He is expected to announce his intentions after returning from a visit to China, Myanmar and Australia, either this month or in early December, said those familiar with the subject, who spoke on the condition of anonymity because they were not authorized to speak publicly on the matter.

If Obama goes ahead with this, and the Supreme Court is unwilling to block it, should the Republicans impeach the President?