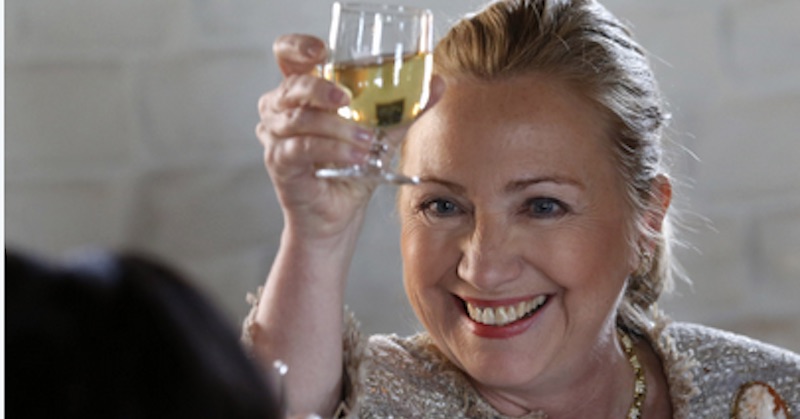 If you want to know what kind of president someone will be, pull back the curtain and look at who’s funding them.

As we do that with Hillary Clinton, keep in mind that compared to these numbers – in the many, many millions, Donald Trump is a piker – having taken a fraction of this money (we’ll run down that later).

Topping Hillary’s list is the Saban Capital Group. The “private investment firm,” (read: hedge fund) has given the Clinton campaign more than $10 million this year alone. Founded by Hami Saban, an Jewish Egyptian national, he has said his greatest concern is to protect Israel. He is also part owner of Univision, Hillary Clinton’s greatest Spanish-language cheerleader. Here’s how the New Yorker described his relationship with the Clintons:

By far his most important relationship is with Bill and Hillary Clinton. In 2002, Saban donated five million dollars to Bill Clinton’s Presidential library, and he has given more than five million dollars to the Clinton Foundation. In February, Secretary of State Hillary Clinton delivered a major policy address at the U.S.-Islamic World Forum in Doha, co-sponsored by the Saban Center. And last November Bill Clinton was a featured speaker at the Saban Forum, an annual conference attended by many high-level Israeli and U.S. government officials, which was held in Jerusalem. Ynon Kreiz, an Israeli who was the chairman and chief executive of a Saban company and Saban’s closest associate for many years, attended the conference, and when I commented that his former boss appeared to be positively smitten with Bill Clinton, Kreiz replied, grinning broadly, “No! No! I remember once Haim was talking to me on the phone, and he said in Hebrew, without changing his tone so Clinton would have no idea he was speaking about him, ‘The President of the United States, wearing his boxers, is coming down the stairs, and I am going to have to stop talking and go have breakfast with him.’”

A close second on the list is Renaissance Technologies, another hedge fund. They sunk $9.5 million into Hillary’s campaign this year. Founder James Simons has given more than $30 million to Democrats and their campaigns since 2006. 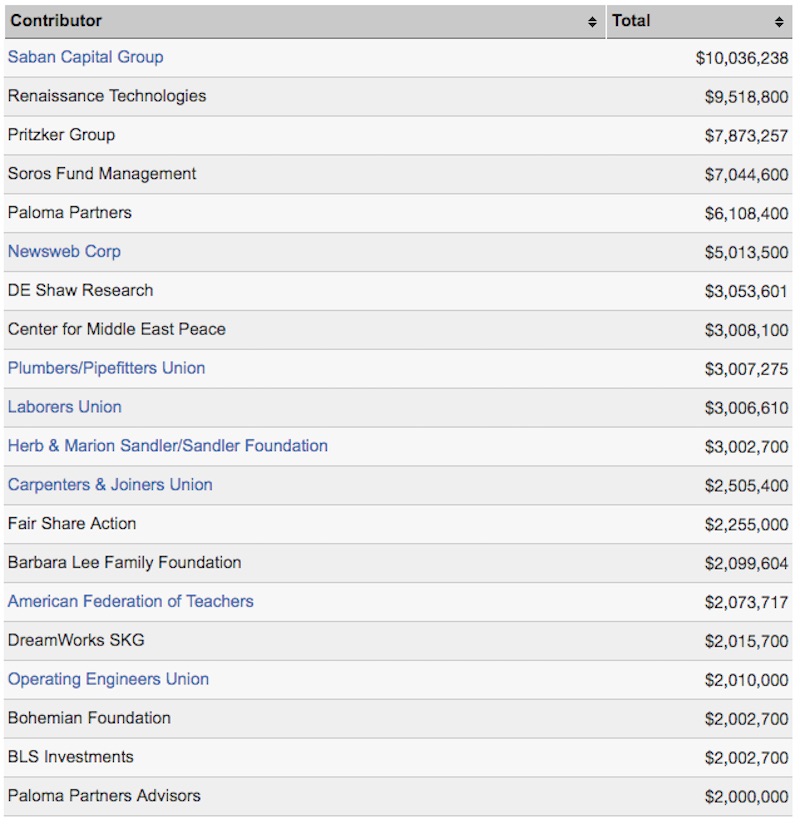 Third on the list is the Pritzker Group, a venture capital firm that also owns Hyatt Hotels (looks like a boycott?). They’ve given $7.9 million to Hillary.

So – as you’d expect – leftist billionaires and hedge funds dominate Hillary’s top donors. But there are some interesting – ones too.

For example – in the “interesting” category, the “NewsWeb Corporation” is a printer of ethnic and alternative newspapers. They seem committed to left-wing causes and their publications and media outlets reflect that. They even had an “Air America” affiliate for a short time, before folks realized nobody wanted to listen to left-wing talk radio.

Also in the “interesting” category is the “Center for Middle East Peace.” They actively support a “two-state” solution and are big backers of liberal national security issues.

All told, it’s tens of millions from hedge funds, unions and financeers. That’s who controls Hillary Clinton and her agenda.

It’s important to note that Trump’s top contributor has given a fraction of all the people on Hillary’s list.

The John Powers Middleton Companies gave $150,000 to Trump this year. Middleton is a TV producer who co-produced The Lego Movie.

Also on the list? A boring group of contributors, really.

There’s a financial group that gave $50,000, a realty company. The AON Corporation. All told, Trump has received zero dollars from Political Action Committees and has self-funded 56 percent of his campaign.

Love him or hate him, he answers to nobody but himself and the American people.

Who does Hillary Clinton answer to? Wall Street, the unions and a bunch of elite rich snobs.

I’m sure you and your issues are in there somewhere.