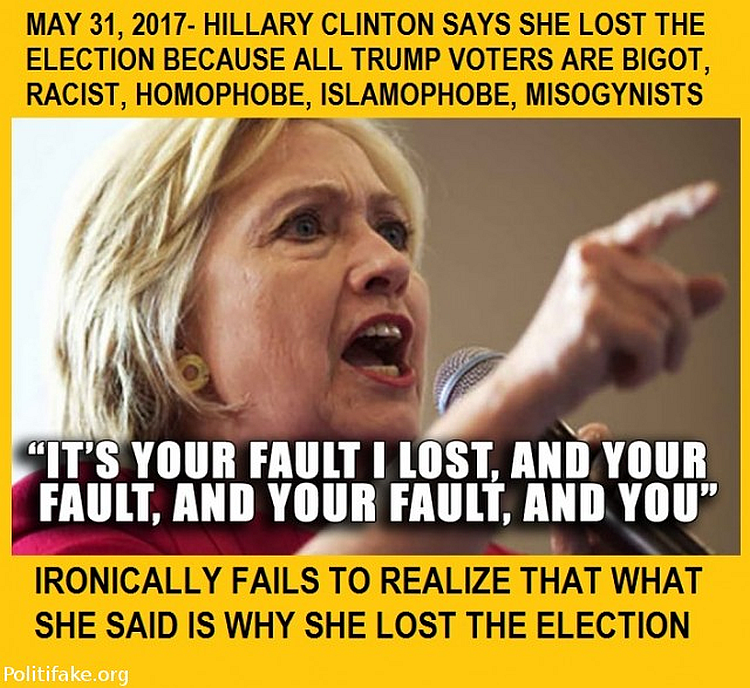 Calvin Freiburger reports that Hillary Clinton has a new book coming out, but while it’s billed as a “memoir,” it sounds like it belongs in the fiction section.

The Washington Examiner reports that her book, due in September, will delve deep into her new favorite conspiracy theory: the Russians who stole the election from her:

“I try to explain what happened and what that means for us to try to arm citizens, to try to give people as simple as possible an explanation that they can then go out and be active and speak up,” Clinton said during an interview at the Book Expo in New York City […]

“This is my truth, and people can disagree, and, guess what? They will, I’m sure, but this is how I experienced being the first woman to break that barrier, get nominated, stand on a stage for debates, deal with all of the incredibly odd, bizarre happenings that were around,” Clinton said. “And I’m very clear in that. I’m saying, ‘Look, you may think you know what happened, and you may be right, to a certain extent, based on what you’ve perceived and how you process it. But, I’m going to tell you how I saw it, and what I felt, and what I thought, because you cannot make up what happened.'”

We shouldn’t be surprised that Hillary is into conspiracy theories; after all, this is the woman who blamed a “vast right-wing conspiracy” for the fact that people noticed that her husband was a lying, lawbreaking sexual predator. But it’s still kind of amazing to watch just how heavily she’s leaning on the Russia idiocy, even after several of her fellow Democrats have admitted there’s no actual evidence for it.

As Tucker Carlson explained the other night, she’s gone way beyond vague insinuations and into the sort of loony fake details and stringing together of events that one would expect from a 9/11 Truther or Obama birther (oh wait — Team Hillary was behind that one, too).

Clearly, she’s still having trouble owning up to her spectacular failure, which is no surprise since she’s believed she was entitled to the White House for years. Losing to Donald Trump of all people was beyond humiliating.

If she wasn’t such a terrible human being, we’d almost feel sorry for her.