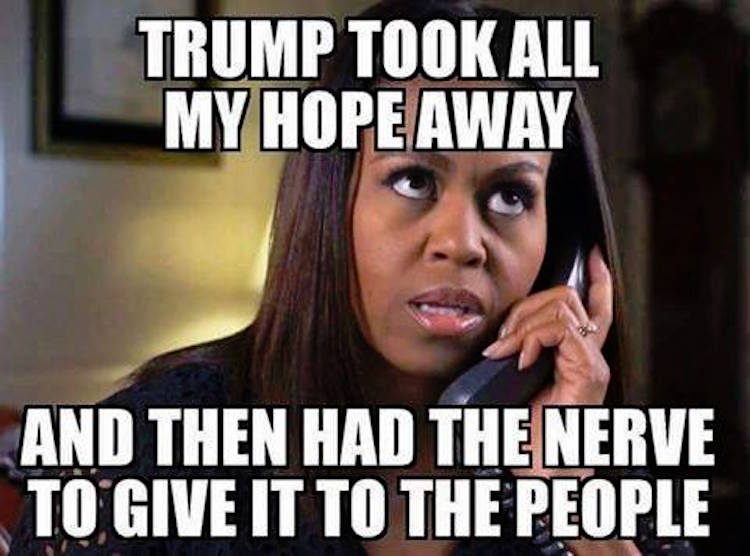 C.E. Dyer reports that Michelle Obama threw a hissy fit during an interview Friday on CBS’ This Morning with Oprah Winfrey. In the interview, she said that after President-elect Donald Trump’s historic win, “now we’re feeling what not having hope feels like.”

Obama claimed that her husband tried to bring “hope” to the American people and now with the changing administration she said “See, now we’re feeling what not having hope feels like.”

“Hope is necessary,” Obama added. “It’s a necessary concept. And Barack didn’t just talk about hope because he thought it was just a nice slogan to get votes.”

“I mean, he and I and so many believe — what else do you have if you don’t have hope,” the First Lady said. “What do you give your kids if you can’t give them hope?”

"What do we do if we don't have hope, @Oprah?" — @MichelleObama pic.twitter.com/DG5O58Pm9I

“I feel that Barack has been that for the nation in ways that people will come to appreciate,” Obama continued. “Having a grown-up in the White House who can say to you in times of crisis and turmoil, ‘Hey it’s going to be OK. Let’s remember the good things we have. Let’s look at the future. Let’s look at all the things that we are building.’”

“All of this is important for our kids to stay focused and to feel like their work isn’t in vane, that their lives aren’t in vain,” she added and then asked, “What do we do if we don’t have hope, Oprah?”

This is why the left’s whinging about tolerance and reaching across the aisle is so ridiculous. The left has no intention of doing so and it’s readily apparent when they lose.

The First Lady made a fool out of herself yet again. It is fitting, however, to go out the way you came in I guess …