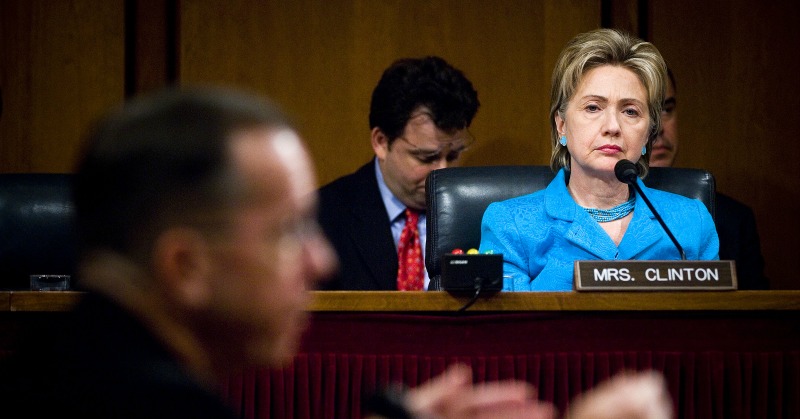 Hillary Clinton is being accused of knowingly allowing American weapons into the hands of ISIS terrorists.

Weapons that Hillary Clinton sent off to Qatar ostensibly designed to give to the rebels in Libya eventually made their way to Syria to assist the overthrow of the Assad regime. The folks fighting against Assad were ISIS and al-Qaeda jihadists.

It’s a long and rather convoluted shipment of weapons that – according to Wikileaks’ Julian Assange – Hillary Clinton was well aware of.

It’s a part of the massive e-mail dump that Wikileaks has from Hillary Clinton. Assange claims that among the 1,700 emails just released, there is proof that – despite what she told Congress – she knew about the flow of weapons from Qatar to Libya and then to Syrian rebels and terrorists.

On the show “Democracy Now!” Assange explained what the whole point of the e-mail dump was:

JUAN GONZÁLEZ: Julian, I want to mention something else. In March, you launched a searchable archive for over 30,000 emails and email attachments sent to and from Hillary Clinton’s private email server while she was secretary of state. The 50,547 pages of documents span the time from June 2010 to August 2014; 7,500 of the documents were sent by Hillary Clinton herself. The emails were made available in the form of thousands of PDFs by the U.S. State Department as the result of a Freedom of Information Act request. Why did you do this, and what’s the importance, from your perspective, of being able to create a searchable base?

JULIAN ASSANGE: Well, WikiLeaks has become the rebel library of Alexandria. It is the single most significant collection of information that doesn’t exist elsewhere, in a searchable, accessible, citable form, about how modern institutions actually behave. And it’s gone on to set people free from prison, where documents have been used in their court cases; hold the CIA accountable for renditions programs; feed into election cycles, which have resulted in the termination of, in some case—or contributed to the termination of governments, in some cases, taken the heads of intelligence agencies, ministers of defense and so on. So, you know, our civilization can only be as good as our knowledge of what our civilization is. We can’t possibly hope to reform that which we do not understand.

So, those Hillary Clinton emails, they connect together with the cables that we have published of Hillary Clinton, creating a rich picture of how Hillary Clinton performs in office, but, more broadly, how the U.S. Department of State operates. So, for example, the disastrous, absolutely disastrous intervention in Libya, the destruction of the Gaddafi government, which led to the occupation of ISIS of large segments of that country, weapons flows going over to Syria, being pushed by Hillary Clinton, into jihadists within Syria, including ISIS, that’s there in those emails. There’s more than 1,700 emails in Hillary Clinton’s collection, that we have released, just about Libya alone.

So it seems like Hillary Clinton may have committed perjury – again. Back in 2013, Sen. Rand Paul grilled Clinton about her knowledge of weapons making their way into Syria:

Sen. Rand Paul: My question is, is the US involved in any procuring of weapons, transfer of weapons, buying, selling anyhow transferring weapons to Turkey out of Libya?

Hillary Clinton: To Turkey? I’ll have to take that question for the record. That’s, nobody’s ever raised that with me.

Sen. Rand Paul: It’s been in news reports that ships have been leaving from Libya and that they may have weapons. And what I’d like to know is, that annex that was close by, were they involved with procuring, buying, selling, obtaining weapons and were any of these weapons being transferred to other countries? Any countries, Turkey included?

Hillary Clinton: Well, Senator you’ll have to direct that question to the agency that ran the annex. And, I will see what information was available.

Hillary Clinton: I do not know. I don’t have any information on that.

If Assange is correct, this is catastrophically bad news for Clinton.