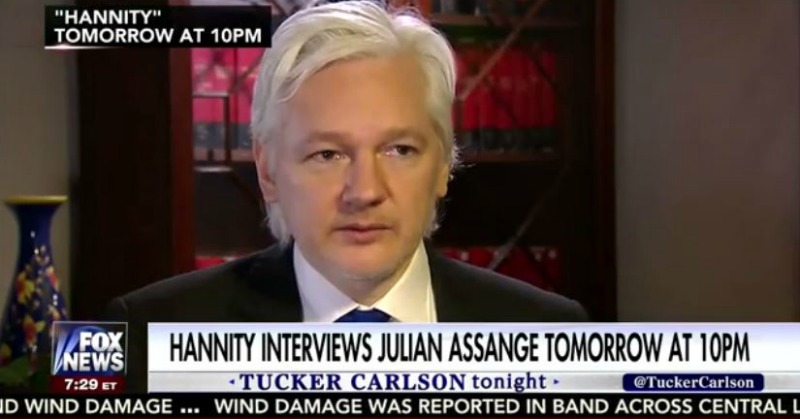 The Democrats and the liberal mainstream media — which are one and the same, as confirmed by the WikiLeaks releases over the summer — have insisted, without proof, that the Russian government was behind the hacks of the Democrats during the election cycle. In response, WikiLeaks founder Julian Assange claimed otherwise yet again in a new interview.

In an interview with Sean Hannity on Fox News, airing Tuesday night, Assange asserted that the information obtained in the Democrat National Committee and John Podesta hacks did not come to them from Russia.

Real Clear Politics posted a transcript of a preview from the interview that will aired Tuesday night:

JULIAN ASSANGE: Yes. We can say, we have said, repeatedly that over the last two months that our source is not the Russian government and it is not a state party.

ASSANGE: Our publications had wide uptake by the American people, they’re all true. But that’s not the allegation that’s being presented by the Obama White House. So, why such a dramatic response? Well, the reason is obvious. They’re trying to delegitimize the Trump administration as it goes into the White House. They are trying to say that President-elect Trump is not a legitimate President…

ASSANGE: Our source is not a state party, so the answer for our interactions is no. But if we look at our most recent statement from the US government, which is on the 29th of December, OK, we had five different branches of government, Treasury, DHS, FBI, White House presenting their accusations to underpin Obama’s throwing out 29 Russian diplomats. What was missing from all of those statements? The word WikiLeaks. It’s very strange.

He hit the nail on the head. This whole fiasco from the Left is about undermining Trump, but I would add that there’s another element and that is to detract from what was found in those leaks.

The DNC leaks and the Podesta emails provided a wealth of damning information about the Democrats that the American people deserved to know.

Just like the Left has had to demonize Trump and his supporters to explain why they refuse to work with the other side — which they have regularly demanded conservatives to do — they also have to demonize/make up the source of the leaks so they can dismiss what was found therein.

What was found in the leaks was so damning that the only way to even try and neutralize it is to create a boogeyman out of whoever obtained that information.

This demonization does double duty as well; it neutralizes what was found in the hacks and provides a scapegoat for losing the 2016 elections.

The problem is that no matter who obtained the information, the American people had a right to know what was found therein and anything that swayed the election is the fault of the Democrats. No one made them engage in the behavior that was outed by the leaks.

The Democrats have basically asserted that the election was swayed by the release of information that outed some of their dirty deeds but take no responsibility for those dirty deeds.

Unless the emails were forged, and if they were we would have heard about it by now (as the Left initially tried to insinuate that they could have been but seem to have since all but dropped that ruse), the blame for any effect they had on the election rests squarely on the Dems’ shoulders.

In addition, other far more dangerous hacks have taken place which have hurt millions of Americans that don’t get the the breathless concern and outrage that these hacks of the Democrat establishment have.