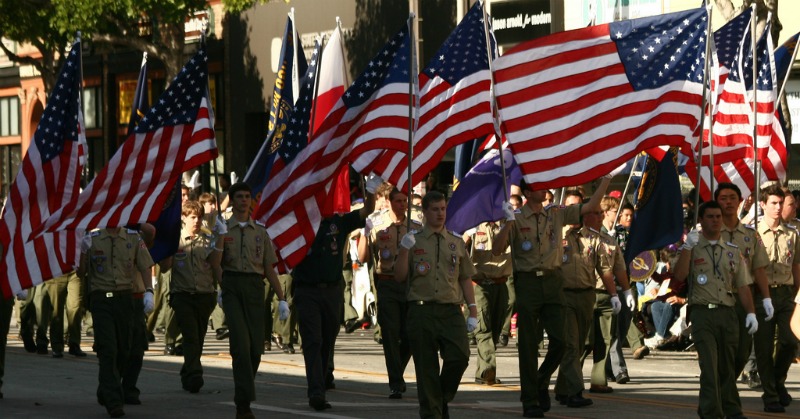 A teenage girl is whining in a new video that she and other girls should be allowed to join the Boy Scouts of America and claimed that the fact that she cannot is “discriminatory.”

Teenager Sydney Ireland is petitioning for girls to be allowed to join the Boy Scouts. In a recent video posted by NowThis Her on Facebook, Ireland claimed: “It’s definitely discriminatory against girls because we have the same ability to earn the rank but we don’t have the access to get that rank.”

No, actually you don’t have the same ability to earn that rank because you’re not a boy, hence the name “Boy Scouts of America.”

According to the video, “Sydney Ireland has been an unofficial member of her brother’s troop,” and “she joined the co-ed Canadian and South African scouts after Boy Scouts of America refused to let her earn any merits or awards.”

That would be because those merits and awards are for boys, but because we’re not allowed to acknowledge that there are differences between the genders — at least when it comes to male groups — that’s suddenly a problem.

Ireland went on to complain that she’s not able to attain the Eagle Rank in the Boy Scouts, the highest award the group offers, because she’s a girl.

The video stated that “she’s [Ireland] written to BSA requesting permittance into the program.”

Then the video went full-on angry, regressive left-wing feminist on us with a comparison that is downright offensive: “But the 106-year-old organization follows policies written before women were legally allowed to vote.”

So this group is actually going to compare the Boy Scouts daring to have an organization just for boys — while there is a Girl Scouts and numerous organizations that just cater to women/girls — with women not being able to vote? That’s downright illogical and extremely offensive.

Ireland, who has been sadly indoctrinated into the cult of irrational victim-hood at a very young age, said in the video: “I think girls should have the opportunity to join either program and earn whatever opportunities they want.”

How about boys then? Can they join the Girl Scouts if they want to? I wonder what this young social justice warrior thinks about that?

Next up in the video, the typical liberal feminist trashing of any mention that there are differences in the genders was addressed: “Boy Scouts focus on leadership skills, while Girl Scouts focus on problem solving.”

And? If that’s the case, couldn’t both organizations implement a bit of both into their programs without girls having to join the Boy Scouts and vice versa?

Also, it’s interesting that these conversations about gender equality generally revolve around traditional feminine roles being seen as less than by the regressive left which generally puts forward that the answer is for women to become men in order to gain equality — thus saying that being feminine is inherently less than masculine, all the while trashing men and telling them that masculinity is bad.

Funny how that works.

The video stated: “Sydney has received support from the National Organization for Women. They are also asking the federal government to defund BSA until they end their discriminatory policies.”

Of course they are.

Ireland concluded: “The Boy Scouts of America is a great organization and it would only get better with allowing half of the population, which are girls, into their program and increasing the diversity within scouting will just make the program better.”

No, it will completely change the program. It will no longer be the “Boy Scouts of America.”

Once again, the left has gone after men in an effort to tear them down. The regressive left has launched a war against men and boys and this is a prime example of it.

If Ireland doesn’t like the Girl Scouts, why not see if they are interested in implementing some of the opportunities from the Boy Scouts into the Girl Scouts? If enough girls want those things and the organization agrees, they could certainly do that.

If not, Ireland and others like her are free to start their own organization, however, it is the height of victim-hood and unfairness to expect an established institution to change the core of what they are because of some misguided idea that acknowledging differences between the sexes is somehow “discriminatory.”

Moreover, not everything has to be “diverse.” Women and other minority groups regularly have their own homogeneous organizations, yet it seems that the only groups that aren’t allowed to do so in society today are white, heterosexual, Christian males — or some combination of those groups.

Now what was that about “checking your privilege?”