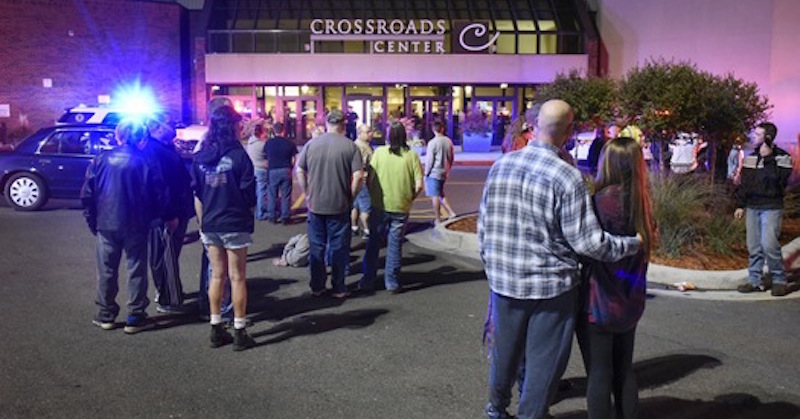 Shouting “Allah Akbar!” the man tore through the mall, stabbing people in his rampage.

By the time it was all over, eight shoppers had been stabbed and the suspect had been shot by police.

It all happened at the Crossroads Center shopping mall in St. Cloud, Minnesota Saturday night.

The suspect – whose name hasn’t been released – was wearing a private security guard uniform. He approached at least one victim and asked if they were Muslim. When they said they were not, he yelled “Allah Akbar!” and stabbed them.

Seven more people were stabbed before an off-duty police officer shot and killed the suspect inside the mall. All the victims were transported to a hospital and as of Sunday morning, all but one of the victims had been released.

Harley and Tama Exsted of Isle, Minnesota, who were in St. Cloud to watch their son play in a college golf tournament, were in the mall when the incident occurred.

“All of a sudden I heard pop, pop, pop,” Harley Exsted told the St. Cloud Times. “I thought someone tipped over a shelf. All of a sudden these people started running. I just saw everybody running our way.”

Amazingly, despite the radical Islamic rallying call of Allah Akbar, despite the suspect asking one of the victims if they were Muslim, the St. Cloud police chief said the motive was unknown.

“We will be diligent and get to the bottom of this,” Anderson said, adding that St. Cloud Police had prior contact with the suspect, but only related to traffic stops.

Asked if this was a terror incident. Chief says he won't call it that yet. We just don't know, he says.