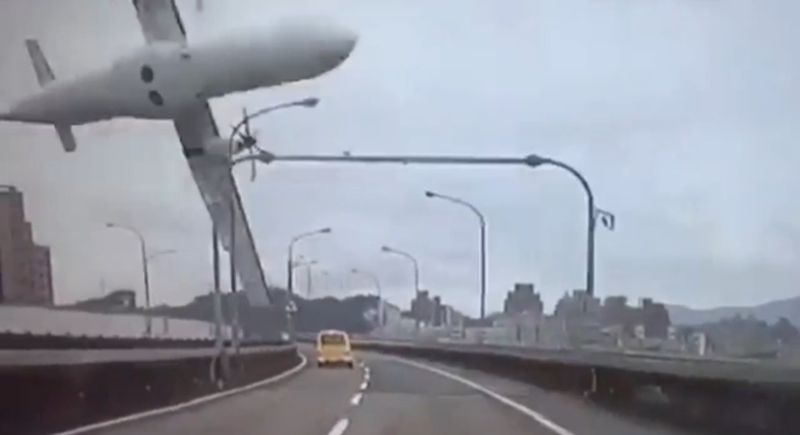 Dramatic video from a dashcam shows a TransAsia Airways plane hitting a bridge just before crashing into the river shortly after tak-off from a Taipei airport.

Thirteen people are confirmed dead and dozens remain missing after the TransAsia Airways ATR-72, carrying 58 people, veered out of control en route from Taipei to Kinmen, off the coast of the Chinese province of Xiamen.

Rescuers were working Wednesday to pull survivors from the submerged wreck of the twin engine turboprop aircraft. Of the 58 people on board, 13 were confirmed dead, 28 injured and the remainder remain missing.

The final communication from the pilots to air traffic control was “Mayday, mayday, engine flame out”, according to a recording played on local media. The recording was not immediately verified by aviation officials, the BBC reported.

This is what happened to the car that was clipped by the plane:

TVBS: Taxi cab was clipped by #GE235 as it descended into river in Taipei. #Taiwan #TransAsia pic.twitter.com/YuvtTl9xUP

Pictures from the recovery:

#Taiwan #TransAsia plane crashed into Keelung River in Taipei, rescuers evacuating those on board @ChannelNewsAsia pic.twitter.com/TM1ypMMh9z

Here is the plane before the crash:

Picture of TransAsia Airways ATR 72-600 B-22816 aircraft that ditched in river after take off
http://t.co/avoO7mzhq3 pic.twitter.com/DSJAR4se9v

It is the second TransAsia ATR-72 to crash in seven months, following an accident last July which killed 48 people and injured 15 the BBC reported.