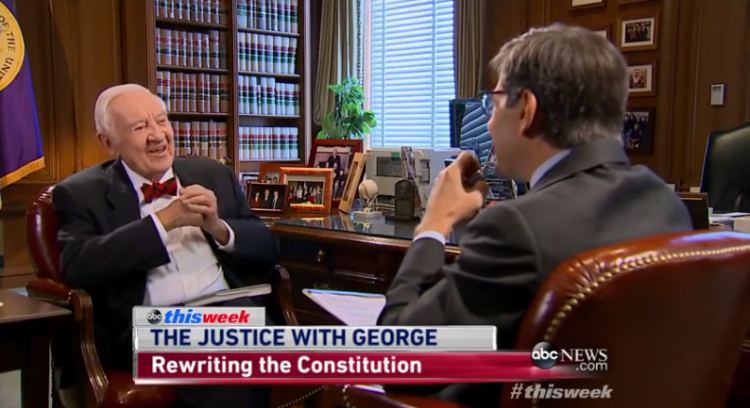 Retired Supreme Court Justice John Paul Stevens supports gutting the Second Amendment in order to remove any limit on government infringements on the right of self-defense.

Stevens made clear that the amendment would clear the way for a national ban on private ownership of the means of self-defense.

In his new book Six Amendments: How and Why We Should Change the Constitution, Stevens — who generally favored maximum government power during his 35-year tenure on the high court — proposes, among other things, changing the language of the Second Amendment to the U.S. Constitution so that the amendment would read, “ . . . the right of the people to keep and bear arms [when serving in the militia] shall not be infringed.”

Stevens acknowledged in an interview Sunday that this would remove “any limits” on government power over legal gun owners.

“I think that’s probably right,” Stevens said on ABC’s This Week. “But I think that’s what should be the rule, that it should be legislatures rather than judges who draw the line on what is permissible.”

Stevens said his proposed amendment, and a potential nationwide gun ban, would be closer to the original intent of the framers of the U.S. Constitution than the amendment the framers actually wrote and adopted.

Do you agree or disagree with retired Supreme Court Justice Steven’s assertion that the framers of the Constitution did not intend private ownership of firearms?