The next time a liberal tries persuade you that public education would improve if only the evil Republicans would give the schools more money, show them this simple, yet powerful chart: 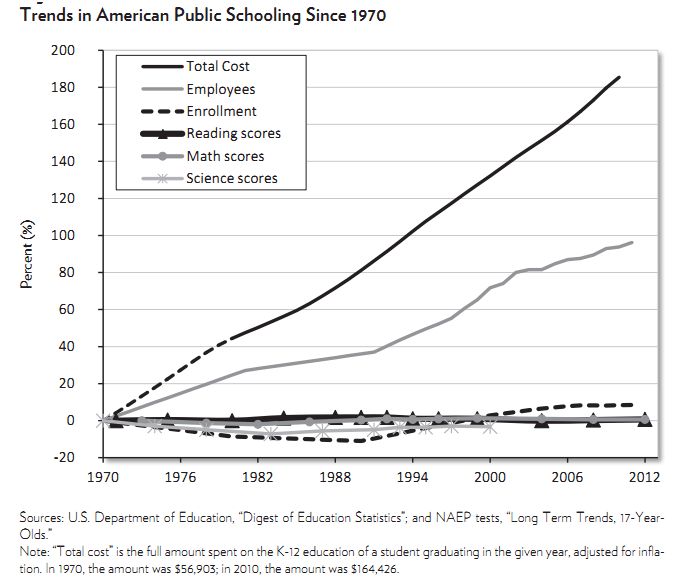 Then show them this video that shows the true costs of public education:

According to a new study by the Cato Institute, some of the nation’s largest public school districts are underreporting the true cost of government-run education programs.

Cato Education Analyst Adam B. Schaeffer explains that the nations five largest metro areas and the District of Columbia are blurring the numbers on education costs. On average, per-pupil spending in these areas is 44 percent higher than officially reported. Districts on average spent nearly $18,000 per student and yet claimed to spend just $12,500 last year.

There is no connection between more funding and better education results.

Educational quality has suffered because of increased federal control over education.

Steve Straub
Steve has been involved in national politics for over 20 years and helps run one of the largest conservative opinion and analysis sites in the country.
Cuomo to Sign Order Authorizing Private Businesses to Deny Entry to Those Who Do Not Wear Masks
Texas Supreme Court Hands Big Win to Trump, Halts Mail-In-Voting Over Fear of Catching Coronavirus
Attorney General Barr Appoints U.S. Attorney to Review ‘Unmasking’ Before and After 2016 Election
Wisconsin Elections Commission Approves Plan to Send Mail-In Ballot Applications to Every Registered Voter
Trump Strikes Back: US to Cancel Visas for Thousands of Chinese Grad Students with Ties to Chinese Military
See more...