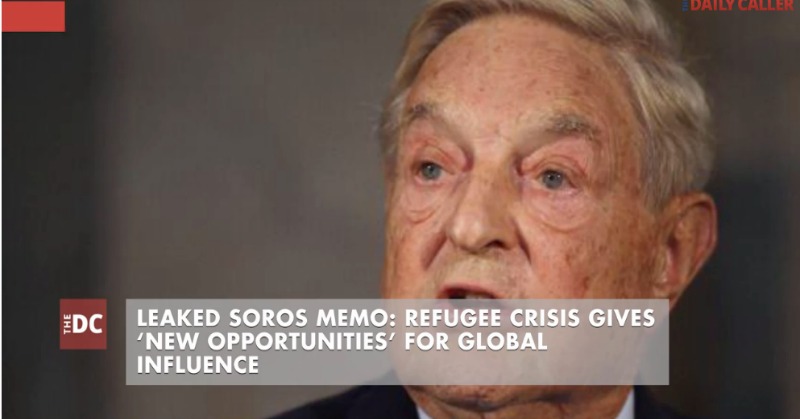 Progressive leader George Soros has big plans for the globe, and it directly involves YOU.

Conservatives and Republicans have been mocked by the left for our reaction to the refugee crisis, and the idea that America wants to bring in more refugees from areas that have a rich history of terrorism.

In a leaked memo, it was revealed that George Soros and his various foundations need you to move past “the need to react” to the influx of refugees and begin to accept it as “the new normal.”

The memo, written by Open Society Foundations program officer Anna Crowley and program specialist Kate Rosin, is entitled “Migration Governance and Enforcement Portfolio Review.” It details the amount of influence that the OSF has over international migration operations, the effectiveness of the OSF in determining how migration laws are(n’t) enforced regionally and globally, and their goal to completely change how the migration of people is governed across the globe.

“We also believed that advances at the regional or international levels could create impetus for policy change or implementation of existing norms at the national level. We deliberately avoided the term ‘global governance’ because there is no single system at the global level for managing migration.”

The memo also names some of the organizations that are helping the OSF with their goals:

“These included key think tanks such as the Migration Policy Institute (MPI) and advocacy networks such as the International Detention Coalition (IDC).” (The authors later note that MPI, a strong advocate of amnesty for illegal immigrants in America, “is sometimes criticized for its closeness to governments, [but] flexible funding from OSF has allowed it to maintain some independence from the governments it advises.”)

There is a point in the memo where it states that the Syrian refugee crisis has created “new opportunities” for the think tank to further influence global immigration.

George Soros and his minions are trying to make it so your voice is no longer heard if you oppose unrestricted immigration into your country. The idea of a sovereign nation will no longer be one that is acceptable if these people get their way. It is much easier to collapse governments and economies to create a global ruling class if you flood nations with people who do not share the values, culture or lifestyles of the adopting land. There is no patriotism or history that will stop the people from bending to the will of these leaders, and if you do attempt to protest, you will find yourself vastly outnumbered.

We cannot fall victim to the idea that a nation without borders is a more “accepting and tolerant” nation. We must not allow ourselves to become pawns in the game of a man whose end goal is a global government. Perhaps most importantly, we can’t let globalist progressives like George Soros turn America into the dustbin of history, and turn this great nation into yet another cesspool to be controlled by his cronies.