Despite warnings from the West, South Korea, and China, the petulant tyrants in the hermit kingdom of North Korea have continued to conduct nuclear tests beneath Mount Mantap. Scientists have predicted that the constant testing may lead the mountain to collapse on itself. Just as they predicted, a series of tunnel networks has collapsed, and up to 200 Korean laborers are dead.

It is not immediately known when the collapse took place (getting exact dates on events in the rogue regime is often difficult because of their isolation). According to a report from The Telegraph, a tunnel network being excavated by about 100 workers collapsed. It was likely shortly after the regime’s sixth nuclear test.

Another 100 workers at the Punggye-ri test site attempted to get their coworkers out, but another collapse happened and likely killed them as well.

An exact date for the disaster has not been provided, but it comes shortly after North Korea conducted its sixth – and most powerful – underground nuclear test at the site.

North Korea claims the September 3 test beneath Mount Mantap was of a hydrogen bomb, with monitors suggesting the detonation was equivalent to an earthquake with a magnitude of 6.1 on the Richter scale.

Some analysts put the yield of the weapon as high as 280 kilotons, while seismologists picked up signs of underground collapses in the hours and days after the blast. 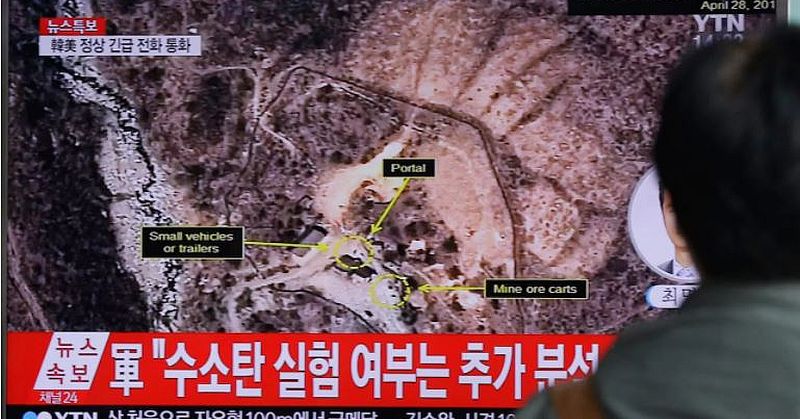 Satellite imagery of the site shows damage to the land after the collapses happened. Such should not be surprising, as we have known for some time that the country’s constant nuclear testing could only go on for so long without causing substantial damage to the existing tunnel networks.

As we reported earlier in October, the test site is in serious danger of further collapse, and if that happens radioactive fallout would be released throughout the entire hemisphere.

Since 2006, North Korea has conducted tested six nuclear weapons tests under Mount Mantap since 2006 at the Punggye-ri Nuclear Test Facility.  Analysts who monitor the 7,200-foot-high peak say the mountain is taking a toll from the tests, now suffering “tired mountain syndrome.”

According to the New York Post, a September blast caused a 6.3 magnitude tremor felt in China. Satellite images show that the mountain visibly shifted from the blast which caused massive landslides and lofted stone and gravel field around the area.

The area is now abundant in seismic activity, suffering three more quakes in the short time since North Korea’s self-proclaimed H-bomb test. International officials say the North’s claims might not have been exaggerated, as earthquakes generated from the blast indicate a massive thermonuclear explosion.

The prognosis of radioactive fallout raining down on North Korea, South Korea, and China (plus many other places in the Far East) is not something to think of as impossible. If the mountain does collapse on itself, the consequences would be absolutely catastrophic.

China is not too happy with the North Koreans right now, and I’ms sure the idea of radioactive fallout raining down is one of the factors contributing to that. Their incessant nuclear testing has seriously hit a nerve with the Chinese leadership, and they have gone as far as to say that if the rogue regime continues to conduct nuclear tests, the Chinese will wage war against them.

Chinese President Xi Jinping has become increasingly frustrated with the behavior of the isolated regime, which insists on having a nuclear deterrent against the United States.

One more missile test, Chong said, and it would “push the country off a cliff.”

President Jinping was said to be “boiling with fury” after North Korea recently tested a missile just as China was gearing up to host a pivotal global economic conference.

The former US ambassador to China Max Baucus recently claimed the only time he saw the Chinese leader use “undiplomatic language” was in relation to Kim Jong-Un.

At this rate, it seems that one of two things may happen. Either the regime will conduct more tests and their test site will collapse, spewing radioactive fallout throughout the region; or, China may be the one to militarily intervene with their neighbors whom, until now, they have been supporting.

Wouldn’t that be the greatest irony of contemporary international relations?