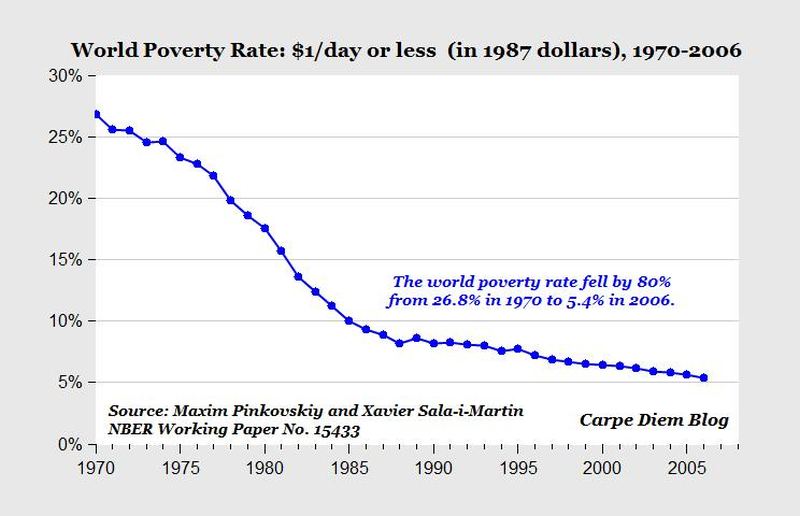 It turns out that between 1970 and 2010 the worst poverty in the world – people who live on one dollar a day or less – that has decreased by 80 percent (see chart above). You never hear about that. It’s the greatest achievement in human history, and you never hear about it.

The World Bank reported on Oct. 9 that the share of the world population living in extreme poverty had fallen to 15% in 2011 from 36% in 1990. Earlier this year, the International Labor Office reported that the number of workers in the world earning less than $1.25 a day has fallen to 375 million 2013 from 811 million in 1991.
Such stunning news seems to have escaped public notice, but it means something extraordinary: The past 25 years have witnessed the greatest reduction in global poverty in the history of the world.

To what should this be attributed? Official organizations noting the trend have tended to waffle, but let’s be blunt: The credit goes to the spread of capitalism. Over the past few decades, developing countries have embraced economic-policy reforms that have cleared the way for private enterprise.

The reduction in world poverty has attracted little attention because it runs against the narrative pushed by those hostile to capitalism. The Michael Moores of the world portray capitalism as a degrading system in which the rich get richer and the poor get poorer. Yet thanks to growth in the developing world, world-wide income inequality—measured across countries and individual people—is falling, not rising, as Branco Milanovic of City University of New York and other researchers have shown.

Capitalism’s bad rap grew out of a false analogy that linked the term with “exploitation.” Marxists thought the old economic system in which landlords exploited peasants (feudalism) was being replaced by a new economic system in which capital owners exploited industrial workers (capitalism). But Adam Smith had earlier provided a more accurate description of the economy: a “commercial society.” The poorest parts of the world are precisely those that are cut off from the world of markets and commerce, often because of government policies. 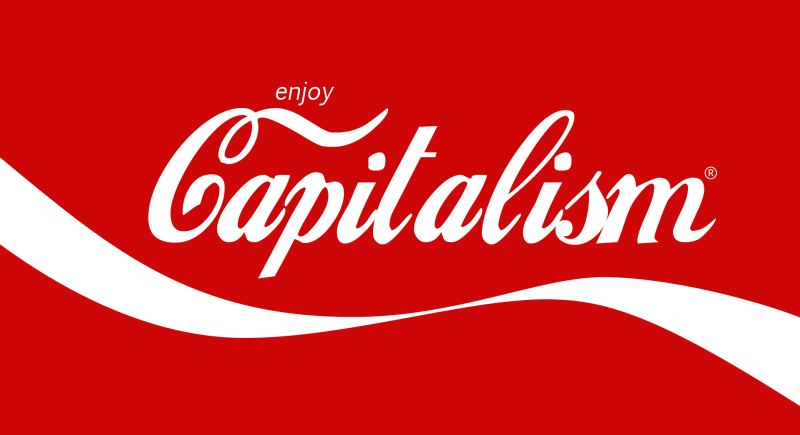 This is the greatest achievement in human history, and because it doesn’t fit the left wing narrative you’re probably unaware of it:

It turns out that between 1970 and 2010 the worst poverty in the world – people who live on one dollar a day or less – that has decreased by 80 percent (see chart above). You never hear about that. It’s the greatest achievement in human history, and you never hear about it.

So what did that? What accounts for that? United Nations? US foreign aid? The International Monetary Fund? Central planning? No.

It was globalization, free trade, the boom in international entrepreneurship. In short, it was the free enterprise system, American style, which is our gift to the world.

I will state, assert and defend the statement that if you love the poor, if you are a good Samaritan, you must stand for the free enterprise system, and you must defend it, not just for ourselves but for people around the world. It is the best anti-poverty measure ever invented.

Capitalism is the greatest thing to ever happen to mankind, which is why those on the left want to destroy it. A free and prosperous people do not need masters, and that is what the left hates the most.

What do you think of this stunning achievement?